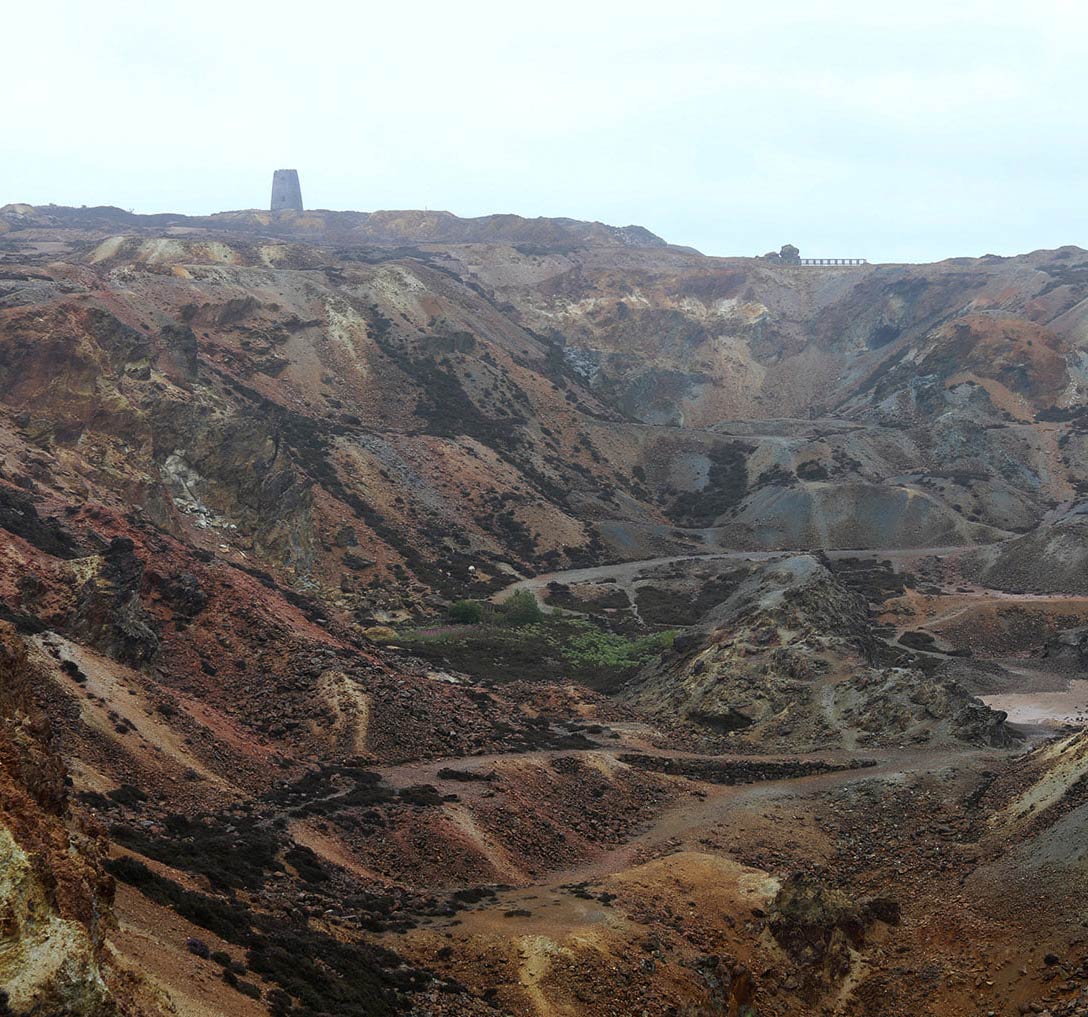 Parys Mountain has been confirmed as a site of prehistoric mining, has some indications of Roman activity and became probably the world’s largest copper mine in the 1780s. Until 1800 most mining was by open cast but from 1810 Cornishmen opened up significant underground workings. By 1910 all significant mining activity had ceased.

Modern exploration began in the 1960s – Canadian Industrial Oil and Gas drilled extensively in the 1970s and Cominco found the polymetallic zones in the early 1980s. Anglesey Mining was formed in 1984 and floated on the Stock Exchange in 1988. Extensive work was done on site between 1988 and 1990. The site was placed onto care and maintenance in late 1991 due to adverse economic conditions. Further surface drilling and major geological mining and metallurgical studies have taken place since 1997 resulting in the significant resource base and subsequent Preliminary Economic Assessment currently in place. In late 2021, additional work programmes including infill drilling and environmental studies commenced.

Since its formation in 1984, Anglesey Mining held an existing mining lease dating from 1971 that entitled it to mine base metals at Parys Mountain. This licence was no longer required when in 1997 the company purchased the freehold of the land and the minerals on the western portion of Parys Mountain where its identified mineral resources are located. It also holds a lease for the land and minerals covering the eastern half of the overall mineralised system.

All the Parys base metal minerals are subject to a royalty to the original land owners.

Between 1988 and 1990 a shaft was sunk to a depth of 300 metres and about 1,000 metres of lateral development were completed on the 280 metre level. Approximately 2,000 tonnes of development ore were hoisted and processed through an on-site pilot plant – concentrate production was sold to the smelter at Avonmouth.

Parys Mountain is one of the most famous mineralised sites in Wales and was selected as an Site of Special Scientific Interest (SSSI) for its’ biological and geological interest. Formally the largest copper mine in Wales, the old mine workings are now an important site for the study and understanding of mineralogy. The mineralised rocks are rich in metals such as copper and zinc and a metallophyte (metal tolerant) lichen community has developed associated with these rocks.

The old site also has a number of important Scheduled Ancient Monuments designated by Cadw. These include the Great Opencast, the windmill and the Pearl Shaft engine house.

After the original feasibility study completed in the 1990’s detailed mine and plant designs were prepared and further more detailed planning permissions were granted.

Assuming favourable economic conditions the directors believe it would be possible for the Parys Mountain mine to go into production in less than 2 years from financing. This was the time frame to completion of construction set out in the banking agreements of 1990.

Mining conditions are good, metallurgy presents no problem and planning permission has been obtained. Some aspects of the tailings arrangements might require further consents. A review of new regulatory requirements introduced since 1991 has not revealed any major hurdles for the project.

There is strong local support for the mine including from the county and local council. The company’s relationship with the Amlwch Industrial Heritage Trust, which takes a keen interest in the site, is excellent. There are no requirements at all to restore any of the old workings and mine dumps on the property – in fact generally these must be preserved and not disturbed or landscaped.

There are many fascinating aspects of Anglesey Mining plc as a company and of the Parys Mountain mine which are worth reviewing here.

The mine’s lunar landscape has been used in a number of films, including Mortal Kombat II. Allegedly it was the world’s largest copper mine and the person most responsible for its development, an Anglesey lawyer named Thomas Williams, was one of the first industrialists and a contemporary of James Watt. He was also one of the first to create a vertically integrated operation in which he controlled mining, smelting, distribution, warehousing and some fabrication work.

It is a much studied piece of ground, providing a rich source of unusual features for geologists, biologists, environmentalists, archaeologists, industrial historians and many more specialist disciplines. The slimes and algae growing in the old underground workings and the surface copper precipitation ponds are scientifically interesting and very colourful. There are uncommon minerals, and orchids growing in contaminated soil.

Although there is presently a great fashion for land reclamation and environmental improvement, the situation at Parys Mountain has been there for centuries and has now become a feature in itself. Much of the surface of the mountain is protected in one way or another rather than being subject to landscaping schemes.

The possibility that bronze age man mined underground at Parys Mountain has, thanks to carbon dating, now become a certainty and further prehistoric discoveries are being made. These finds tend to indicate that our bronze age ancestors were considerably more advanced than had previously been thought.