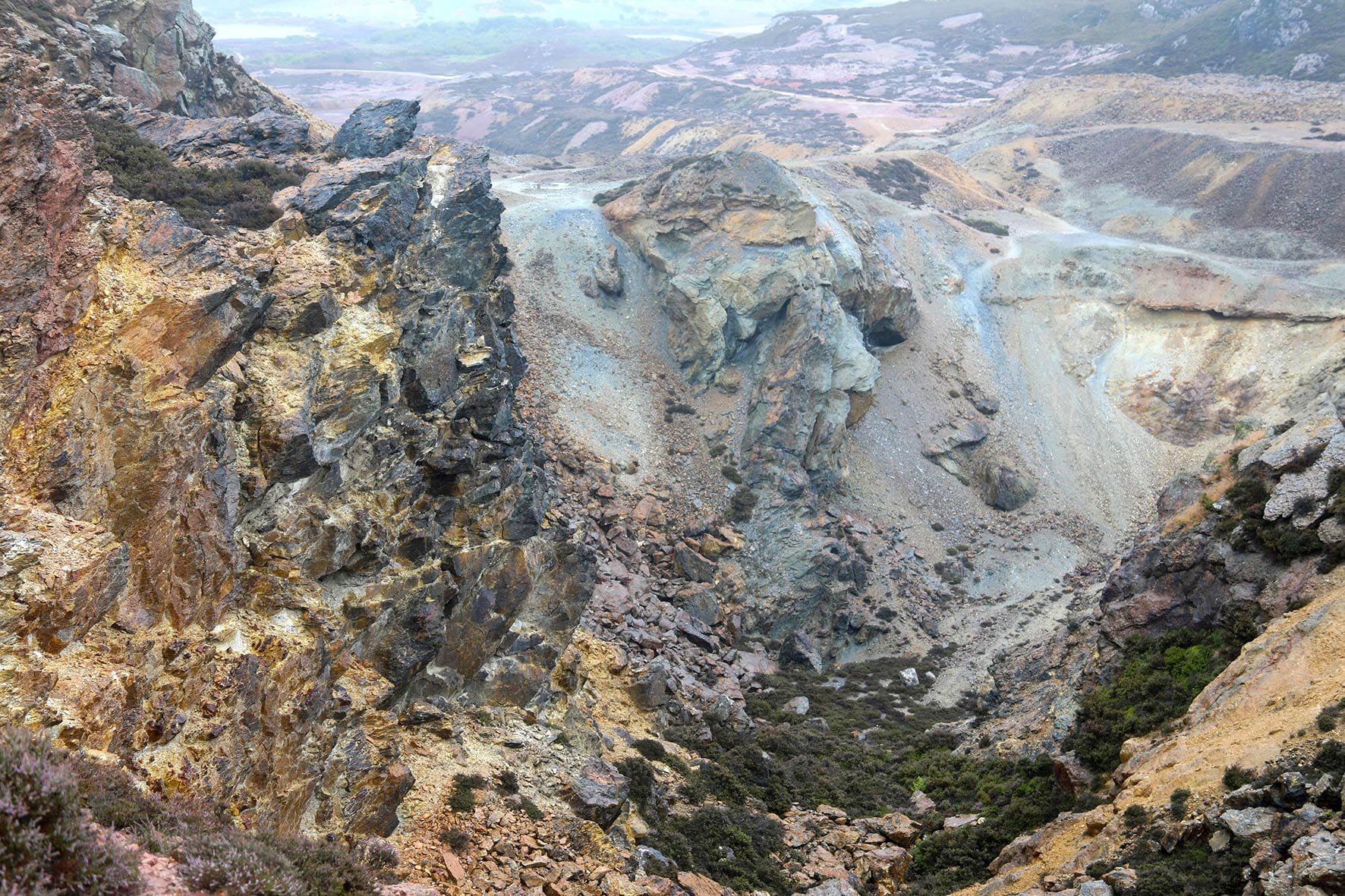 The Parys Mountain project is interpreted to be a volcanic hosted massive sulphide zinc-lead-copper deposit.

The deposit is located at or near the contact between Ordovician shales and the overlying Silurian volcanic sequence. The volcanics are predominantly comprised of rhyolites with some basalt occurring as a thin sheet intercalated with the lower rhyolites.

The deposit area appears to represent an east-west trending synclinal structure with outer limbs of Proterozoic basement, overlain by the Ordovician Shales, Silurian Rhyolite and with a core of Silurian shales, locally known as the Central Shales.

The massive sulphides of the Engine Zone, within the basal Southern Rhyolites, comprise a 100-200 metre wide zone traceable down plunge for 800 metres. The sulphides are present as three lenses separated by thin rhyolite bands with peak grades of 25% Zn,10% Pb, 4% Cu, 400g/t Ag and 5 g/t Au over narrow intervals.

The White-Rock Zone, found within the Northern Shales near the Northern Rhyolite contact, comprises quartz rich rocks and semi-massive sulphides.

The Northern Copper Zone is located within the Carreg-y-Dol Zone, also near the contact of the Northern Shales and the Northern Rhyolite. This zone contains massive quartz rich rocks with chalcopyrite-pyrite rich veins and pods of semi-massive sulphide up to 15m in thickness. The shallow part of this zone was mined in the 19th century and passes down into silicified Northern Shale with centimetre scale quartz-pyrite-chalcopyrite veins which appears to host a large, lower grade Cu dominant deposit.

Importantly, the mineralised system remains open and untested along strike to the east and will be the target of ongoing extensional exploration activities.

In the late 1700s and early 1800s, copper was mined from chalcopyrite-pyrite vein-like deposits utilizing an extensive series of shafts (now the collapsed open pits) and underground galleries. Although occurrences of bluestone were reported, it was not possible at that time to separate Pb and Zn from sulphide ores, so any such material that was encountered was discarded or sold for a low value. The origin of the copper veins has been long debated. Although they have been traditionally viewed as late tectonically controlled veins, partly because of the abundance of associated quartz (which forms the infamous ‘white-rock’ outcrops), it is also possible that the veins are related to the same mineralising system that produced the massive sulphides. Otherwise, one has to appeal to the ‘lightning struck twice’ hypothesis in order to account for the presence of two major mineralising systems almost side by side.

Unfortunately, there is not much information available on the geology of the old mines. However, a couple of excellent books were written in the sixties and seventies, which make interesting reading. These detail the history of mining and smelting at Parys Mountain, and its importance both to the industrial revolution and to the British economy in general. Much earlier in 1819, Michael Faraday visited the mine while taking a break from making scientific discoveries in Scotland and lucidly describes the operations in his book ‘Travels in Wales‘.

The old workings at Parys Mountain are now being explored and partly reopened though the efforts of a group of avid cavers and archaeologists led by Dr. David Jenkins of Bangor University.